Maclay Bridge Alliance defines environmental impacts in terms of both human and natural environments that include traffic, safety, social, noise, river, stream, floodplain, fish and wildlife impacts. Short cutting the environmental analysis process for rehabilitating Maclay Bridge vs building a new bridge in a new location is fiscally, socially, and environmentally irresponsible. A proper and extensive environmental assessment would consider all impacts and properly display them for public review and input.

If a new bridge is built on South Avenue, the greatest human impact may be the compounded effects of induced traffic demand, caused by an expanded and widened road which will trigger an increase in use, whether intended or not. There are many unanswered questions about how increased traffic may affect each of the above impacts to the human and natural environment.

Differences exist in traffic predictions for Maclay Bridge. Montana Department of Transportation predicted that traffic over Maclay Bridge would escalate over 2010 levels by more than 100% by the year 2040. Traffic levels declined by more than 25% in 2014 followed by a gradual increase according to Missoula County traffic counts.

In fact, Maclay Bridge Traffic and Safety Analysis completed by traffic planner, Nathan Huynh, Ph.D, projected a new estimate for 2040 that is lower than the level of traffic measured in 2010. This is largely attributable to the closure of the Smurfit Stone paper mill (http://www.maclaybridgealliance.org/documents/Traffic-Safety-Analysis-11-29-2018.pdf, p 4). In addition, the Metropolitan Planning Organization traffic projection, prepared at the request of Missoula County Commissioner Dave Strohmeier, predicted that traffic levels by 2045 would be lower than those predicted in the Huynh report. (Add link to the Environmental Analysis Report, HDR, October 15, 2019, P. 28, Table 4-3, 2019.) These findings suggest that reconstructing the existing single lane bridge will facilitate an environment of less traffic congestion, slower speeds, less noise, and lower pollution levels than a new double lane bridge.(See How a New 2-Lane Bridge Will Change the Rural Character of Target Range)

Under the reconstruction scenario (Alternative 1, Dr. Kim), the bridge would be updated with a cantilevered pedestrian walkway and arches design approach. These changes would bring the bridge up to load carrying capacity of 36 tons, thus meeting structural weight capacity for the safe passage of pedestrians, bicycles, school buses and emergency vehicles. In addition, the Pony and concrete spans would be replaced with a single through truss span like the existing Parker Through Truss , allowing for removal of two of three existing piers. 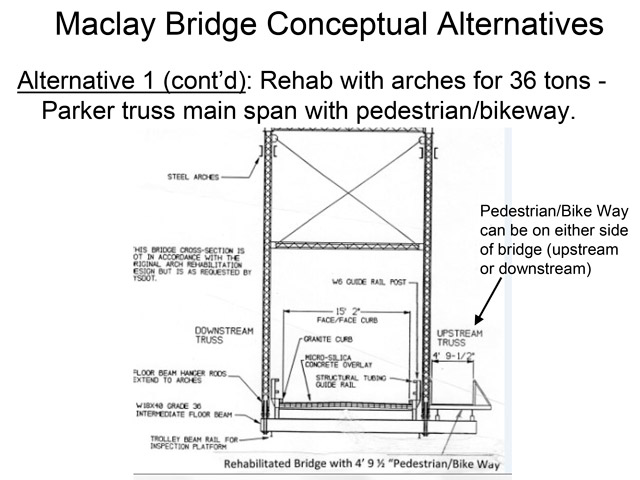 For 50 years, there have been complaints about undesirable behaviors in and around Maclay Bridge (e.g. teenagers jumping off it, littering, illegal parking). These behaviors are experienced at other bridges in the Missoula area river corridors, from the Blackfoot to the Clark Fork to the Bitterroot and are not unique to Maclay Bridge. Building a new bridge will not eliminate these behaviors, it will simply extend the problems to another location. The current County Commission has worked diligently with local law enforcement to increase patrols near the bridge, which has resulted in improved parking compliance, less litter, and a reduced number of complaints from neighbors living near the bridge. Additional proactive measures (e.g., fencing or other) could reduce undesired behavior.
Past drownings at the bridge have also been raised as a concern. There is no evidence to substantiate this claim. In the past 23 years, there was one drowning near the bridge on August 13,2011, that of a young boy who was walking next to the river and fell in. As such, this tragic accident was not related to Maclay Bridge other than as a public access point. A new bridge poses the same risk.

Impacts to the Natural Environment

“As FWP understands the South 1 Option, bridge construction could compromise the integrity of the Lower O’Brien Creek corridor that we have all worked hard to protect and improve. In addition, relocating the bridge to this location would impact a large reach of currently intact riparian vegetation along the Bitterroot River.”

If Maclay Bridge is reconstructed in a manner consistent with Dr. Kim’s preferred recommendation Alternative 1, indications are that it would benefit the natural environment, in contrast to the significant detriment of building a new bridge in an unimpacted location. Specifically, reconstruction of the existing bridge, would remove two piers and thus improve flood capacity toward achieving current standards for flood capacity. Other benefits to pier removal include reducing stress on local riverbanks and bridge/pier backwater effects. Installing a new bridge at the proposed South Avenue crossing location, including two large piers, two bridge abutments, and road embankments would create an additional, very large encumbrance to the Bitterroot River and compound overall river impacts in the area. Keeping the current Maclay Bridge location, utilizing existing road embankments and reconstructing the existing bridge, would avoid additional and unnecessary impacts to the river, maintain the relatively pristine upstream floodplain and confluence of O’brien Creek, and actually improve river condition and functions because two piers would be removed.

The riverine areas and O’Brien Creek Drainage provide natural habitat to a variety of wild species. A partial list includes, elk, white-tailed deer, black bear, wolves, coyotes, foxes, bald eagles, osprey, red hawks, blue herons, a variety of ducks and geese. The list goes on to include turkeys, grouse, mink, beaver, squirrels, martin and more. Aquatic species include westslope cutthroat trout, bull trout and other salmonids. Many of the upland animals are hit, injured, or killed by vehicles on the rural backroads that already bear the burden of too many cars. Some of these unfortunate incidents also end in severe damage to the vehicles and injury to the passengers. Therefore, possible benefits derived from a new South Avenue Bridge are likely to be overshadowed by harm due to induced traffic loads with accompanying higher speeds.

Giving human and natural environmental considerations their full due, through a proper and appropriate environmental analysis, is the only way to determine whether it makes more sense to rehabilitate Maclay Bridge or build a new bridge at South Avenue.