The Case for Rehabilitating Maclay Bridge

The iconic, historic Maclay Bridge is beloved by locals and visitors alike. Listed on the National Register of Historic Places in 2016, Maclay Bridge has steadfastly served as a conduit to and from the Target Range, Big Flat, and Blue Mountain areas since a bridge was first built in 1893. Thrice washed out, the bridge was rebuilt in part or whole in 1935, 1948 and 1964, and continues to faithfully carry cars and pedestrians alike across the beautiful, meandering Bitterroot River. Area residents depend on the bridge year-round for access to and from their neighborhoods to the greater Missoula area and beyond. Fishermen, paddlers, and other river recreationists drive over, float under, swim near, and picnic next to the bridge during seasonal outings. Deer, great blue herons, bald eagles, and osprey are commonly sighted, as well as an occasional moose or beaver.

The one-lane design speaks to simpler, slower times, when neighbors stopped to chat about crops and the weather. That friendly ambiance is still alive and well at Maclay Bridge today. Drivers congenially stop on either end of the bridge, waving to one another, while unhurriedly waiting their turn. The wait is never long, 30 seconds to a minute is most common.

Despite over a century of service and the historical significance of Maclay Bridge, it has been targeted for demolition and replacement on several occasions beginning in 1994. Should the bridge be replaced the new bridge is slated to be built on an extension of
South Avenue West. In 2012 the Montana Department of Transportation (MDT) commissioned the Maclay Bridge Planning Study on behalf of Missoula County under the auspices of the Federal Highway Administration (FHWA). The purpose of the study was to identify financially feasible improvement options to address the needs and objectives defined by the community, the study partners and resource agencies.

It was at this time that the Maclay Bridge Alliance formed to advocate on behalf of saving the historic bridge. The alliance has grown to include upwards of 200 concerned residents and supporters. MBA requested that the Bridge Planning Study consider rehabilitation of the bridge as an alternative but this option was rejected because, according to the government study group, only
replacing the bridge would allow it to meet modern volume and geometric alignment standards. MBA resolutely disagrees with this conclusion. MBA cites neighborhood safety and the bridge’s historical significance which allows waivers for certain design standards while it favors historic preservation. A wider, straighter 2-lane bridge will not necessarily be safer because speeds will increase, as will the possibility of head-on collisions.

In 2015, a previous Missoula County Commission approved an ordinance to support the bridge replacement project. This allowed Missoula County engineers to take control of the project and manage it with guidance by MDT and FHWA. Missoula County hired the engineering firm HDR to design the bridge replacement and in the fall of 2016 HDR announced its preferred alternative, a new 2-lane bridge at the end of South Avenue West. Once again, rehabilitating the Maclay Bridge was not considered. Bridge replacement with federal funding is an endeavor which automatically trips the National Environmental Policy Act (NEPA) process. Under NEPA there are two levels of review to assess the impacts of a project on the natural and human environment, in order from least to most robust: Environmental Assessment (EA) and Environmental Impact Study (EIS). An agency may, in certain circumstances, choose to exempt a project from NEPA review through selecting a Categorical Exclusion.
Categorical Exclusions are defined as “a category of actions which do not individually or cumulatively have a significant effect on the human or the natural environment… and for which, therefore, neither an environmental assessment nor an environmental impact statement is required.”

Missoula County, with concurrence by MDT and FHWA, determined that no environmental review was appropriate for the Maclay Bridge project and assigned a CE (Categorical Exclusion) designation to the Maclay Bridge project. A CE means that neither public comment, nor bridge rehabilitation must be considered when weighing the options. MBA strenuously objects to the  CE designation believing that the bridge replacement project rises to the level of a more thorough environmental review, complete with public input, which has been significant.
42 USC § 4321 et seq.; 23 CFR part 771 (FHWA NEPA regulations)

Even though rehabilitation is not required under a CE, Section 106 of the National Historic Preservation Act does require that option be considered without bias. When MBA pointed this out to HDR, rehab was added to the study but was dismissed.

MBA enthusiastically supports rehabilitation of Maclay Bridge because it is the most economical, environmentally sound, historically relevant, and locally supported option. Rehabbing the bridge squares with the Target Range Neighborhood Plan that was created and adopted by residents surrounding and served by the bridge. Approved in 2010 by the Missoula County Commission, the Neighborhood Plan recognizes the urbanized elements of the area unequivocally endorses preserving the rural nature of Target Range which is bordered by the Clark Fork and Bitterroot Rivers. Importantly, according to two separate proposals commissioned by MBA, rehabbing the bridge is completely feasible.

Links to the studies 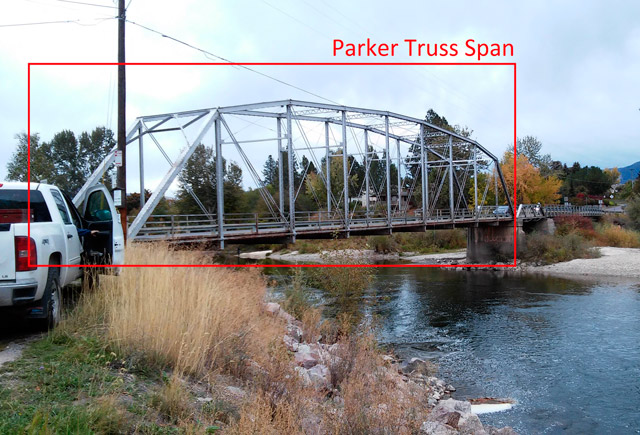 In 2016 Dr. Jai Kim, professor emeritus of Bucknell University and Robert Kim, PE, MSCE, presented MBA, the county and HDR with concept plans for strengthening the old Parker Truss portion of Maclay Bridge with superimposed arches to increase structural redundancy and capacity. The shorter Warren Pony Truss and the pre-stressed concrete spans on the east end of the bridge would be removed and replaced by a single-span, arch re-enforced, Parker Truss as well.

This bridge rehab concept, which would maintain the one-lane design, is referred to as the Middle Way by MBA. An overhaul that preserves the character of the bridge and the beauty of the river, while providing a lasting, sound structure will address the following factors

When considering whether to preserve Maclay Bridge or replace it with a new bridge at the end of South Avenue, safety is the first and greatest concern for MBA. Research on both alternatives points to rehabbing Maclay Bridge as the safest alternative. The two main safety considerations in preserving Maclay Bridge are traffic at the bridge site and throughout the neighborhood, and structural improvements.

Traffic-wise, the historic one-lane Maclay Bridge serves as a natural traffic calming measure. Studies have shown that traffic calming improves safety without sacrificing operational level of service (USDOT, 2018). Compared to the proposed new bridge on South Avenue West, the safety and operational benefits of Maclay Bridge, once rehabilitated with a pedestrian and bicycle lane, include:

Between 2013 and 2017, there were six crashes within 500 feet of Maclay Bridge, two of which resulted in injury. None were fatal. A Road Safety Audit and use of warning signs, delineators, and/or pavement markings will provide additional safety measures on a rehabbed bridge. Traffic near the bridge has actually decreased on average of 3.7% annually since 2010 despite predictions by the Missoula County Traffic Demand Model for significant increases. (From Dr. Huynh’s report)

Structurally, the Maclay Bridge is classified as “fracture critical”. That means that the failure of a single tension element such as a connection, joint or member could cause partial or complete bridge collapse. As a fracture critical bridge, it is inspected every other year by MDT and is not in danger of collapse. However, the redesign will add structural redundancy which will remove the fracture- critical characteristics of the bridge, making it safe for decades to come. In addition, the revamped bridge will increase its current carrying capacity of 11 tons to 36 tons, which will bring it up to current weight standards and allow the safe passage of school buses and emergency vehicles such as fire trucks and ambulances. Pedestrian and bicycle safety will be enhanced with an attached, cantilevered walkway that separates walkers and bikes from traffic.

South Avenue currently dead ends just past Hansen Drive, close to the Bitterroot River. The surrounding neighborhood is lightly trafficked. If the replacement bridge is built on South Avenue West, the entire neighborhood will see significant traffic increase, and all the attendant problems associated with that: more vehicular accidents, more severe accidents, negative impacts on pedestrians and children at play, and increased noise. This proposal does not consider the effect of cut-through traffic that will be induced with a South Avenue Bridge: traffic that will be generated trying to avoid congestion on Highway 93, or Reserve Street when drivers will opt to cut through residential areas via South Avenue, Third Street and Clements Road.  An on-site safety assessment, completed by Huynh in preparing his report in conjunction with Missoula Rural Fire Chief Chris Newman in November 2018, yielded the following findings: In addition, the section of South Avenue west of Humble Drive is not as wide as, nor aligned with the rest of the road east of Humble. Two cars cannot safely pass a pedestrian or a cyclist in its current configuration. There is also a blind hill adjacent to several driveways on this section. HDR plans call for tapering the new bridge approaches to connect to the current substandard South Avenue.  MBA questions whether a straight, wider bridge connected to a substandard narrow country road on South Avenue West will be safer than traffic slowing down to cross a single lane rehabbed Maclay bridge. While straightening and widening bridges increases safety on Interstate Highways, this is an “off-system” (county-owned) bridge. It links urban and rural roads, which have a history of diminishing safety returns, when the lanes are widened beyond 11’. Unfortunately, the plans and funding for the project include only the construction of the bridge and its approaches and do not consider nor include additional road improvements that will be necessary to maintain public safety on South Avenue.  Buoyed by Dr. Huynh’s and Dr. Kim’s research, MBA passionately believes that a rehabbed Maclay Bridge is the safest available option with the least disruption to normal traffic and the neighborhood that will host it.